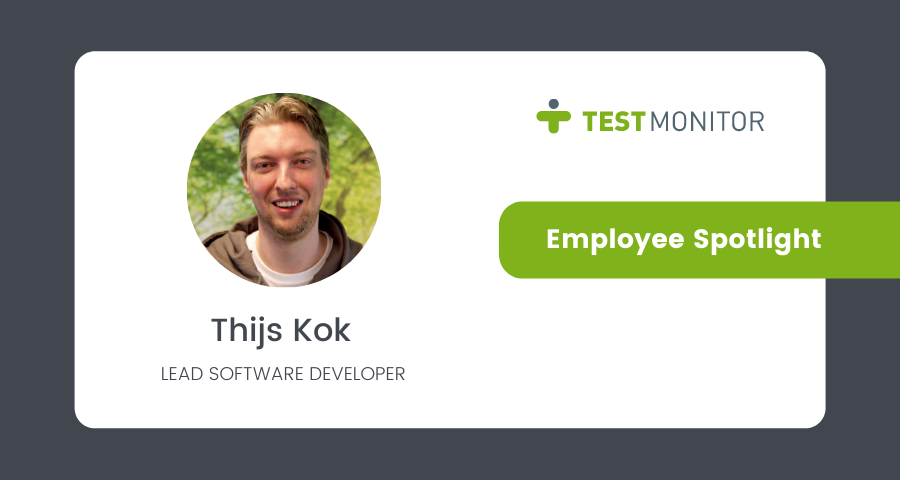 The team at TestMonitor may talk about software, software testing, and test management all the time, but it is the people behind our organization that drive our brand forward.

That is why we want to highlight the professionals at TestMonitor and share their backgrounds, perspectives, and passions with the world.

This time, we spoke with Thijs Kok, Lead Software Developer at TestMonitor, to learn more about his background, expertise, and visions for the future.

Thijs has always had a fascination with computers. Not only with how computers work and the programming that defines them, but also how people interact with them in their personal and professional lives.

Keeping with his future role at TestMonitor, Thijs explored how organizations can create software that helps people use technology more intuitively. And this was so much more than just creating better computer keyboards or teaching people how to use a mouse. Instead, he studied cognitive ergonomics, which is at the intersection of computer science and psychology.

In fact, Thijs was so immersed in this subject that he chose it for his master-level thesis in Information Science, a field that explores new ways to share, interpret, and organize information to solve problems. His thesis delved into how to design the best user interface given the capabilities of the human brain and our motor skills.

Upon completing his degree, Thijs joined what is now TestMonitor. Fast forward 13 years, and Thijs is still enjoying his first full-time job.

Persevering and Growing at TestMonitor

When Thijs first joined TestMonitor, there were only 20 other employees. Thijs was the only developer. The rest of the team consisted of software consultants helping organizations with end-user and software acceptance testing.

As some will remember, early on in software design, there wasn’t much focus on a human approach to technology. In turn, many B2B solutions did not emphasize intuitiveness in their design requirements. Initial versions of TestMonitor were no different.

Instead of changing his path, Thijs dug in to improve the software and help TestMonitor grow a customer base, driven by a desire to make the platform an example of what user-friendly software can be.

Today, there are three more developers and a variety of other roles, including UX developers, test experts, and support team professionals. Now, Thijs is in charge of building out the depth and breadth of functionality in the TestMonitor web application.

As a result, Thijs has enjoyed seeing TestMonitor move through the stages of growth, including recent international growth.

Enjoying Time Outside of Work

As with many in the technology field, Thijs’ interest in computers extends into his hobbies, and he enjoys programming and testing out new programs in his free time.

However, when it comes to vacations with his family, it’s time to “put everything on mute,” in his words.

“When our family goes on holiday, we aren’t sunbathers,” he says. “We usually go to Ireland or England to enjoy the solitude and peacefulness of the green landscapes.”

Although not a sunbather, Thijs and his wife enjoy long walks on the beach during the warmer months. And though it’s been years since he’s played, you might find him considering giving the saxophone another try.

What’s Next for Thijs and TestMonitor?

Thijs isn’t the only one that believes that TestMonitor is on the cusp of being synonymous with test management, but he is probably the one enjoying shaping the platform’s path and direction the most.

In the last two years, TestMonitor has seen tremendous growth and success with customers worldwide, and Thijs doesn’t see this slowing any time soon.

TestMonitor has come far since Thijs’ first day 13 years ago. He was involved with the first prototypes, the first cloud-based version, and TestMonitor’s first international customer. Now, with customers all over the world, he is excited about the future that lies ahead.

The team at TestMonitor may talk about software, software testing, and test management all the time, but it is the people behind our organization that drive our brand...

Inside TestMonitor: The Test Management Tool Built with Developers in Mind

When you hear about “user acceptance testing” (UAT), it sounds easy enough: you get potential end users to validate that a system meets their expectations for...

Want the latest news, tips and advice in next-level software testing? Subscribe to our blog!